On July 1, 2020, the minimum wage in the District of Columbia will be $15 per hour. Our  recently published study in the Economic Development Quarterly, finds that a $15 minimum wage will produce significant income gains for most of the District of Columbia’s 61,000 low-wage resident workers and only slightly impact the city’s level of relatively low-wage jobs (see here and here). The study also finds that in 2021 approximately 62 percent of the resident workers impacted by the city’s $15 minimum wage policy ($15 MWP) will consequently lose a sizable amount of their Earned Income Tax Credit (EITC). This policy-induced increase in wage income, however, is estimated to more than offset the amount lost in EITC for this subpopulation of resident workers. 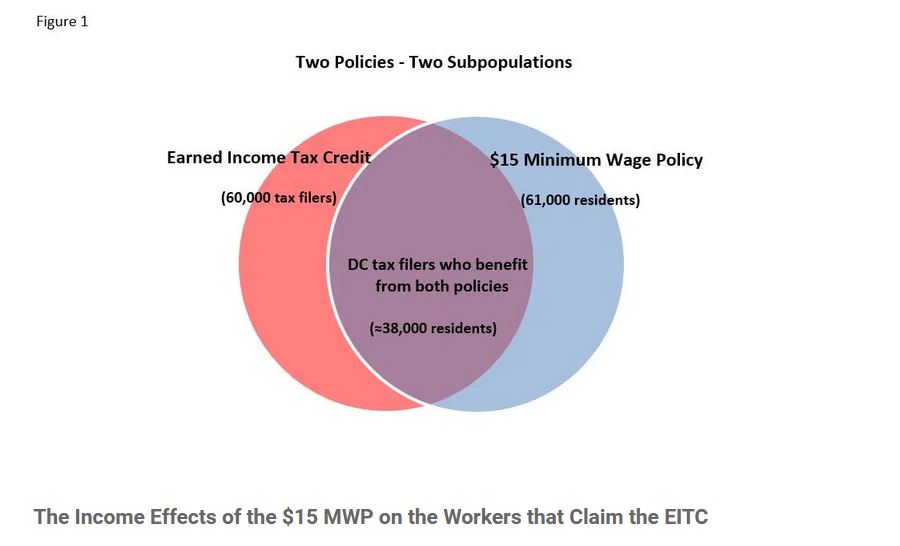 The federal EITC is based on a schedule where many EITC recipients earn a decreasing EITC amount as their annual income increases. The policy simulation models we used in this study indicate that most of the resident workers in this analysis are expected to lose some federal and DC EITC dollars as a direct result of the $15 MWP. Figure 2 shows that the average full-time worker in 2021 will gain $3,097 in higher annual wage income.  (Year 2021 is one year after the full implementation of the $15 MWP and when the national & local economies are estimated to be recovering from the current pandemic and recession.) However, the higher income from the $15 MWP will cause the worker to lose an average of $332 in combined federal and DC EITC, causing the average worker (with 1 EITC dependent) to be better off with a net increase in resources amounting to $2,765 or 11.3 percent (Figure 3). In contrast, full-time workers that do not have dependents and are not EITC recipients are likely to be only $2,587 or 10.5 percent better off (Figures 4 and 5). The interplay between the $15 MWP and the EITC is such that the consequent lower federal and DC EITC amounts for many under the $15 MWP are more than offset by the policy-induced wage rate increase. 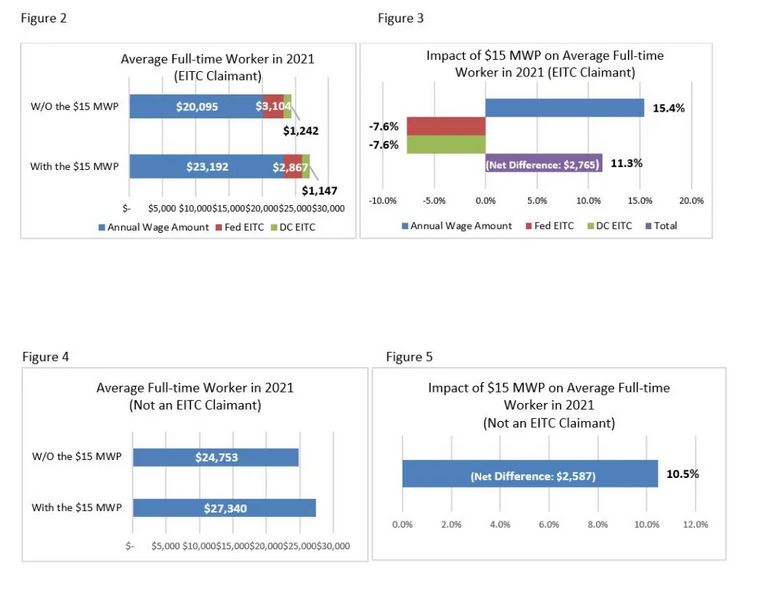 On July 1, 2020, the minimum wage in the District of Columbia will increase to $15 per hour, and every year thereafter the wage will be increased in tandem with the area’s inflation rate. Via the policy interaction of the $15 MWP and the EITC, we find that there is a substantial overlap of subpopulations of DC resident workers from each policy. We estimate that of the 61,000 resident workers impacted by the $15 MWP, 38,000 of them will lose $16.4 million in federal and local EITC payments in 2021 in exchange for $54.6 million in higher wage income.