The Cost of a Guaranteed Spot in a DCPS Elementary School

In most parts of the District, people who wish to buy a home face an expensive housing market. The costs become even higher if you want to buy within the boundaries of a high performing public school so your children have the right to attend that school. 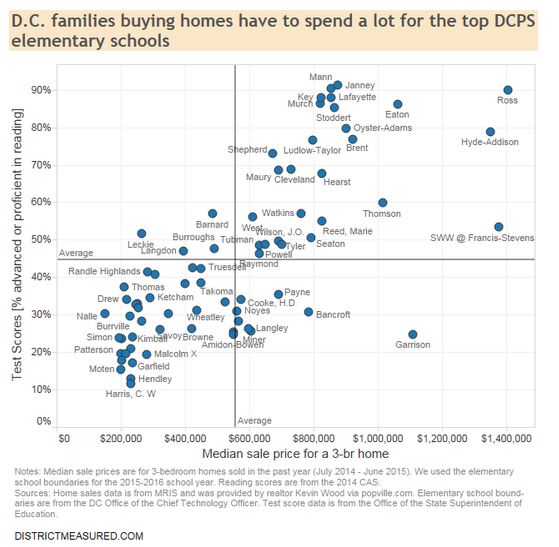 The maps below show two different ways to sift through this data, one that begins with the buyer’s budget and the other one with the school’s performance. You can find some relative deals, and also again see the constraints on families who are not high income.

The first map shows elementary school performance for a given price range, summarized in five tiers based on each school’s test scores and growth in test scores. The school tiers we use are from the Office of the State Superintendent; you can read more about the performance tiers here.

If you filter the map to show places where median home prices are below $500,000, you’ll see that only elementary school zones on the eastern edge of the city fit this criterion. These schools mostly fall into the three lowest performance tiers of five, though a handful schools (Leckie, Nalle, Burroughs, Barnard, Truesdell) fall into tier two, the second highest performance tier.

The second map shows the range of median home prices in each school performance tier. For example, if you filter the map to see tier-2 schools, you’ll see that median home prices range greatly, from $150,500 in Leckie to $1.4 million in School Without Walls at Francis-Stevens. The map also shows that for a tier-1 school you’re looking at a minimum median home sale price of more than $750,000. 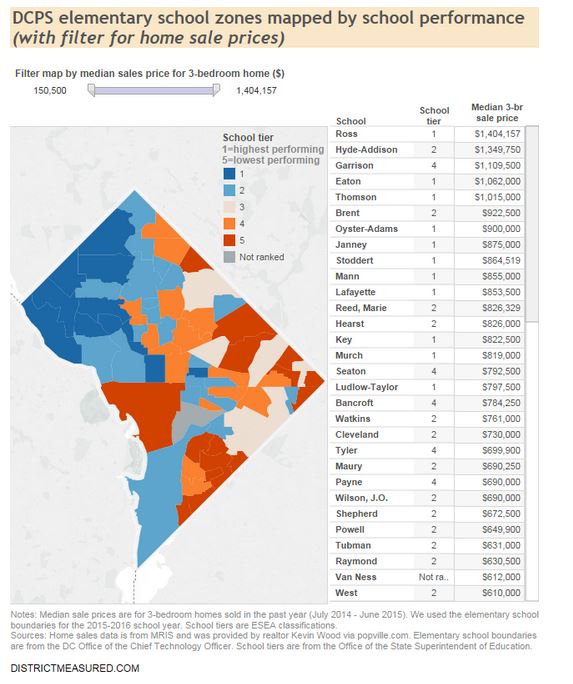 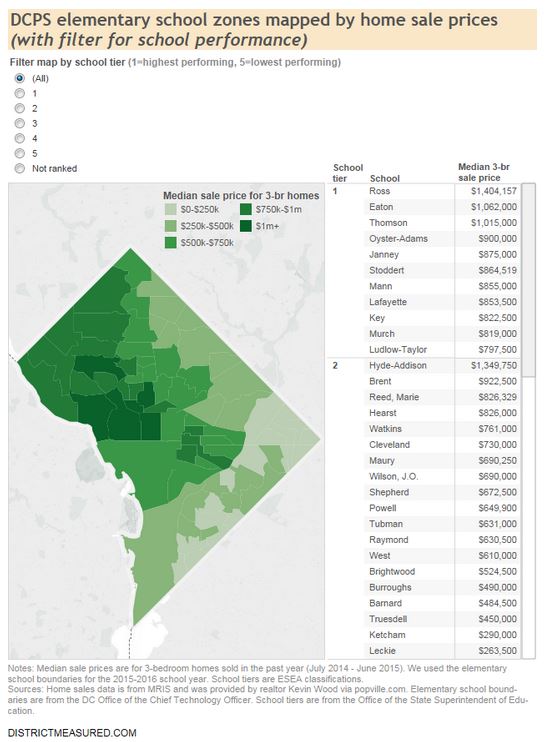 How do families who can’t afford top home prices navigate the educational landscape in D.C.? Around 44 percent of the District’s public school students attend a public charter school. Students earn the right to attend a charter school through a lottery; where they live is not a factor. Out of the public school students who attend a DCPS school, 40 percent attended a school outside of their zone in 2012. Some of these students entered out-of-boundary schools through a lottery, while others had the right to attend more than one school. Once the new school boundary system is completely phased in, DCPS students will have the right to attend only their in-bounds school.

Also, plenty of students live in homes with fewer than three bedrooms (our unit of analysis) and have parents who rent instead of own their homes. This could help defray the costs of living in the boundaries of top-performing schools.

Median sale prices are for 3-bedroom homes sold in DC in the past year (July 2014 – June 2015). Home sales data is from MRIS and was provided by realtor Kevin Wood via popville.com.

We used the new DCPS elementary school boundaries that will be phased in starting in the 2015-2016 school year. Children who are assigned to new schools under the new boundaries will be able to stay in their current schools. The boundaries are from the DC Office of the Chief Technology Officer.

School tiers are how the Office of the State Superintendent of Education (OSSE) ranks schools by performance for federal reporting and accountability purposes. You can read more about the performance tiers here. In our post we numbered the tiers, but OSSE instead uses the terms “Reward, Rising, Developing, Focus, and Priority”. We used the tiers OSSE assigned schools in 2014. Reading scores are from the 2014 D.C. CAS.

Correction: In a previous version of this post we said that 71 percent of DCPS students attended a school outside of their assigned zone in 2012. In fact, 40 percent of DCPS students attended out-of-boundary schools in 2012. The initial version of this post also said all of these students entered these schools via lottery, but under the old boundary system some of these students had the right to attend these schools.