With Uber and other ridesharing services becoming a common transit option for some DC residents, we wanted to get a sense of when someone might substitute an Uber trip for a Metrorail trip. To do this, we plotted data on travel time and cost, creating a visualization that shows whether Uber or Metro is faster, and at what cost, for 114 different trips between Metro stations. By adding in the time it takes to wait for a Metro train or Uber, walk to the Metro, or sit on a delayed train, we can see how a person’s decision might change depending on their circumstances.

The trips we analyzed include trips between the city and the suburbs as well as trips within the city. In our visualization below we define a long trip as one that’s more than five Metro stops.

Interact with the graph and change the assumptions. 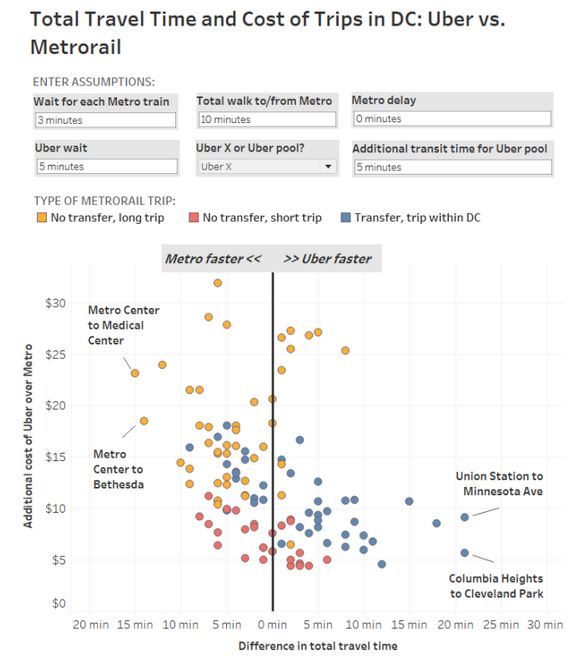 We found that for longer trips between the center of the city and the suburbs, Metro tends to be both more cost-effective and quicker than Uber. But for trips within the city that require a Metro transfer, Uber is often quicker than Metro, especially when Metro wait times are long, like on weekends, or when there are delays. While Uber’s regular service tends to be much more expensive than Metro, Uber Pool makes some Uber trips nearly as affordable as Metro.

The data for our analysis comes from the Metro trip planner, the Uber app, and Uber Movement. All travel times are from the weekday evening rush hour, which likely gives Metro an advantage on trip times. We pulled our data after SafeTrack ended.

The graph above shows a scenario that favors Metro, since there are no delays and relatively short wait times for trains (3 minutes). Under this scenario, Metro provides a trip as fast or faster than Uber for 67 of the 114 trips we looked at. Metro is especially efficient for longer trips from downtown to the suburbs that do not require transfers. A trip from Metro Center to Bethesda, for instance, takes 33 minutes, and that includes time to wait for the train and walk to and from the station. An Uber takes 47 minutes, and comes at a far higher cost. Meanwhile, Uber tends to be faster, even during rush hour, for trips within the city requiring transfers. Going from Union Station to Minnesota Avenue or from Columbia Heights to Cleveland Park, for instance, is about 20 minutes quicker in an Uber than on Metro, even when Metro is running efficiently, without delays or long headways.

With Metro’s spoke-and-hub configuration, it’s not surprising that trips requiring a transfer that have origins and destinations relatively close to each other are quicker in an Uber than on Metro. Metro accounts for this, and has bus routes connecting the “spokes” of its rail system. You can get between the Union Station and Minnesota Ave Metro stations using the X2 bus. To get from Columbia Heights to Cleveland Park you can take the H4 bus. Some folks have their own work-arounds, and might bike between these locations. All of this is to say that even if Uber is faster than Metro for trips with a transfer, there are other modes of transit a person can use to make this sort of trip.

The scenario under which the case is stronger for Uber is when Metro has a delay or a long wait for the train, like what you’d encounter on a weekend or at night. If we increase the wait time for each train from 3 minutes to 10 minutes, as we do in the graph below, Uber becomes quicker for the vast majority of trips (99 out of 114). For example, the trip from Columbia Heights to Eastern Market is 9 minutes faster in an Uber when there is a 10-minute wait for a train. With a wait of only 3 minutes, Metro would be faster for this trip. 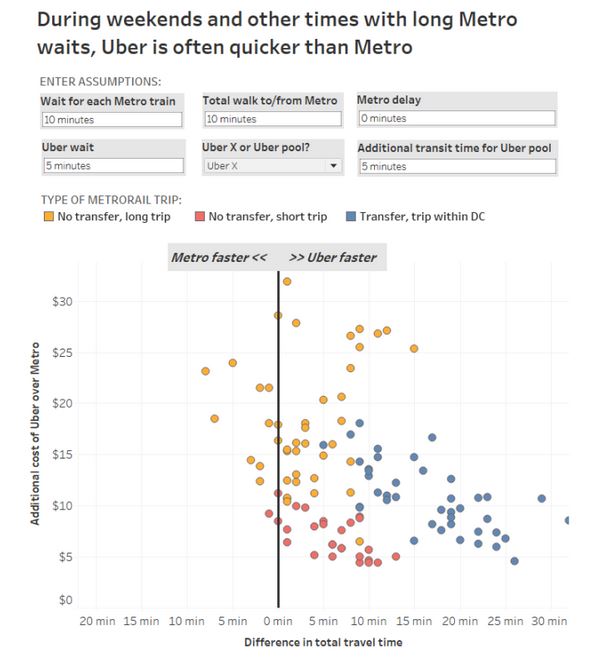 But what about cost? You can save 9 minutes by taking an Uber from Columbia Heights to Eastern Market when there are 10 minute headways, but the Uber ride will cost you about $10 more than Metro. For some people the time savings will not be worth the cost. But with Uber Pool, which allows you to share a ride with a stranger whose route roughly coincides with yours, you can get rides at a reduced cost.

If you take an Uber Pool for the trip between Columbia Heights and Eastern Market, for instance, the ride will be about $1 more than on Metro. The graph below shows that with Uber Pool, 74 of the 114 trips we analyzed have Uber fares that are no more than $5 above what you’d pay on Metro for the same trip.

With the reduced price there is a trade-off: we assume a ride in an Uber Pool will take 5 minutes longer than in a regular Uber. 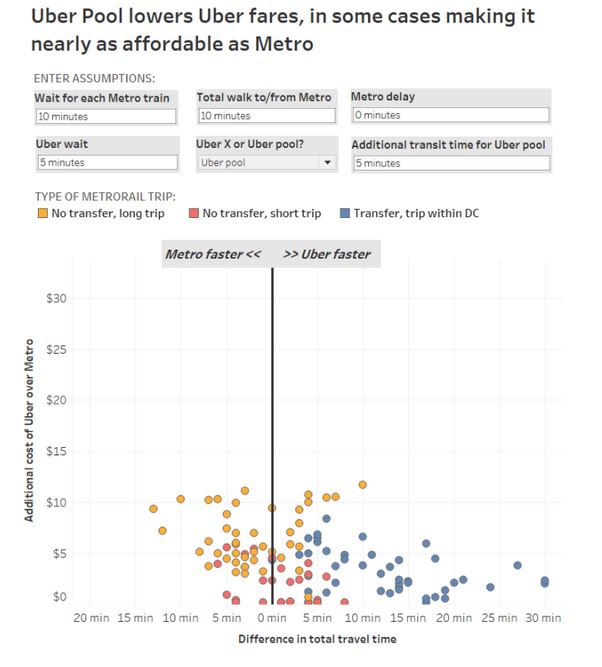 It is unclear how long Uber prices will remain this low. Several news outlets have reported that Uber subsidizes its rides with money from investors, meaning current fares might not reflect the full cost of a ride.

We want to caution that we are not sure if our findings are representative of the entire Metrorail system. We looked at 114 trips, but there are over 4,000 possible trips you could take on Metro. The trips we included in our analysis are listed in the graph below. You can use the graph to search for a particular station and see whether Uber or Metro is faster for a trip involving that station, given assumptions you enter about wait times. The trips we included fall into two categories: 1) trips from either Metro Center or Chinatown to all other stations in the system, with the origin being the station that makes the trip one without a transfer (though we did exclude trips of only one stop in length); or 2) trips within DC city limits requiring a transfer, with one end of the trip including a jobs center (Foggy Bottom, Navy Yard, etc), nightlife center (Shaw), or other heavily-used station (Columbia Heights). In the second case we purposefully included some trips for which we thought Uber would be faster than Metro in order to broaden the range of differences in trip times.

Use this graph to search for particular stations. 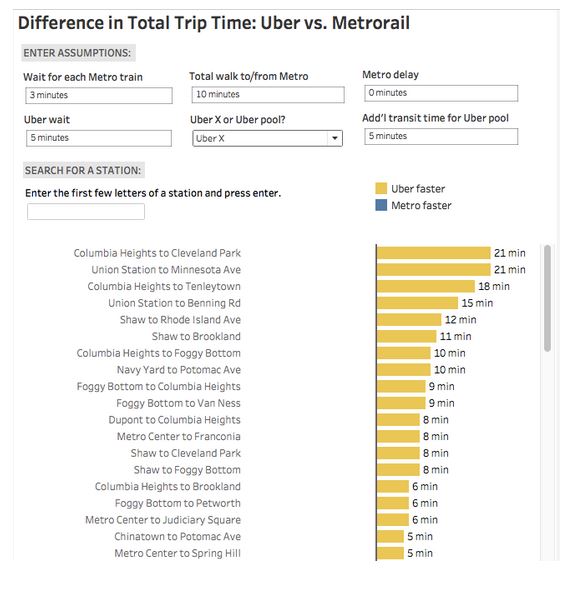 You can download the data we used for this post here. Below we describe how we gathered the data.

Metro: Metro trip times come from the Metro trip planner. We did not include in the trip times the time it takes to wait for a train or to transfer trains, since we made our own assumptions about wait times. We also used the trip planner for the cost of Metro trips. The trip times and costs are for weekdays at 5:30 pm. We pulled data from future dates, meaning the times do not capture unexpected delays, and the trip times did not appear to be affected by planned track work. The dates we entered to pull the data were after SafeTrack ended.

Uber: Uber trip times come from Uber Movement. The times are the three-month average for April, May, and June, 2016, during the weekday evening commute. It is unclear whether the times from Uber Movement include Uber Pool trips, which we believe could take longer than Uber X trips. (We asked Uber whether Pool times were included, but did not receive a response.) When we accessed Uber Movement, the tool was in Beta form. It is now no longer in Beta and is available to the public.  We gathered Uber cost data on the Uber app between 5pm and 6pm on the following dates: July 5, July 6, and July 19, 2017. To the best of our knowledge, prices were not surging on these dates nor was there rain during the times we collected the cost data.