The Mystery of the District’s Self-Employed

When the CARES Act passed in March, self-employed persons were granted eligibility to apply for and receive unemployment benefits for the first time in history through the Pandemic Unemployment Assistance (PUA) program.  The self-employed have always been a part of the economy, but the CARES Act marked a turning point for this business type with formal acknowledgement by legislators to the importance of supporting them. But who are the “self-employed”? The identity of the self-employed has long been a mystery. And like the solution to any mystery, one must ask the right questions, find the right clues, and piece together those clues to arrive at the truth.

With the self-employed people two narratives exist. In some cases, self-employed data is lumped in with businesses, and in others they are an employee for themselves. Even among policymakers, the overarching question of, “who and how many are self-employed?” is often debated. Are the self-employed only those people in the “gig economy” or are they established firms that we may frequent daily without knowing they are self-employed? To solve this mystery, we dug through publicly available federal data from the Census for the District of Columbia to gain a better perspective on this significant group. For the sake of simplicity, the self-employed referenced here are “single-person firms” where the owner is the only employee of the firm.

The Tale of the Self-Employed Establishment

Source: Census, Statistics of US Businesses and Non-Employer Statistics

From the Employee Narrative

In the self-employed establishment, payroll expense varies depending on the share after expenses remaining. As noted in Figure 2, the self-employed account for approximately 1.0% of all payroll earned within the District between 2007 and 2017. 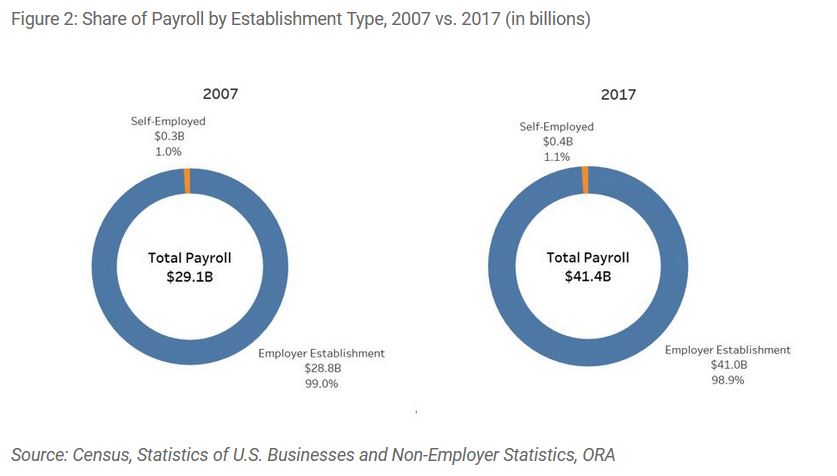 Contrary to popular belief, self-employed individuals are not relegated to only ridesharing or other app service employment. As Figure 3 shows, the majority of the self-employed are to be found in the Professional, scientific and technical services sector, one of the District’s largest employment sectors, and a major driver of District economic growth in recent years. 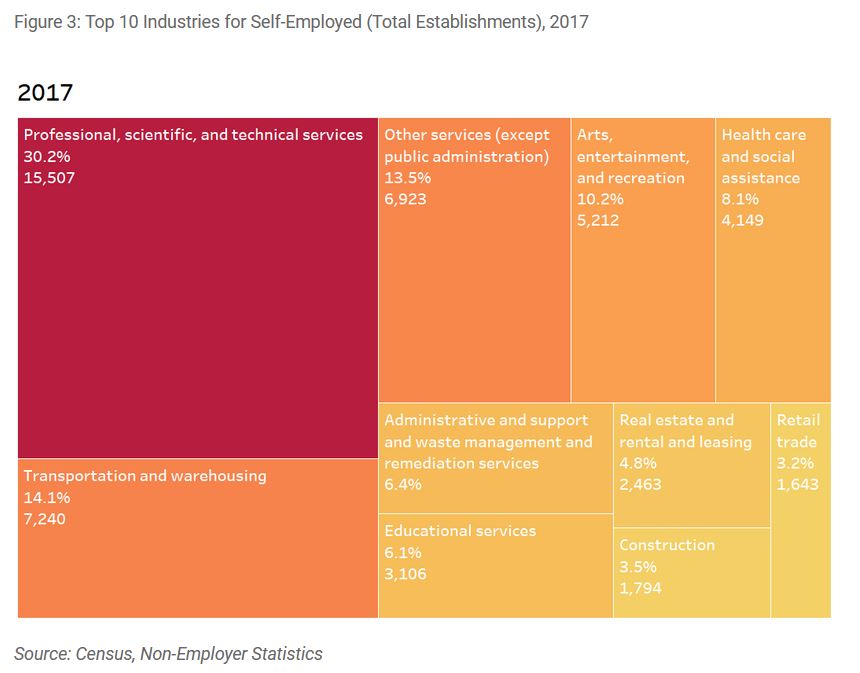 The mystery of the self-employed has eluded policymakers for decades. Dueling narratives of self-employed as establishments or employees have complicated the issue even further. As establishments, the level of newly self-employed within the District has grown continuously since 2007 to become 70 percent of all establishments by 2017. Viewed as  employees alone underestimates the significance of self-employed as an important driver of District economic growth, given the share payroll in 2017 accounted for by self-employed was estimated to be 1%. Contrary to popular thought, the self-employed are not restricted to retail or transportation, but are prominent in well-established skill-based sectors of the District economy. Overall, their contributions are not limited to tip-based income but have amassed to $1.9 billion in sales annually. However, there is no easy solution to the mystery of the self-employed, only more questions. But, the Census data may be the cipher we need to begin unraveling this mystery and answering those questions in the future.

For an interactive experience, check out our blog dashboard companion piece in Tableau, “The Mystery of the District’s Self-Employed.”